You don’t need me to tell you that Super Smash Bros. Ultimate has been an absolute triumph, a hugely ambitious project in a series that boggles and reboggles its fans with the sheer scope of all the features included. Well, an even more ambitious project was also set to draw to a close – namely my Smash Bros Pub Tier List (but of course).

But then – wouldn’t you know it – more DLC has been announced, meaning that all of the Fighter’s Pack #1 guys, girls and bears below are already old hat. Can you believe that? Actually, what I can’t believe is how quickly I flexed my stubborn attitude on downloadable content, and bought it. Whereas previously, if it wasn’t on the disc or cartridge or cassette tape then I either stole it or didn’t want to know. But now I’m on my knees in front of Sakurai-san, waiting for him to finish. Ah, finish the second Fighter’s Pack, that is.

Incineroar was destined to be a wrestling ‘heel’ right from the off. His reveal trailer in a Smash Direct took a rumoured Smash Bros leak, featuring all kinds of dream characters like Banjo-Kazooie and Isaac from Golden Sun, and gave it a hell of a piledriver. Once Incey here showed up, that was it for your Genos and your Mach Riders. It’s almost hard to believe that little Litten grew up to be a wrestler. How come we can’t have Skitty 2 Hotty doing the worm across the pub? Rey Mewsterio throwing out 619s? I must say, I’m equally delighted and terrified by the idea that a little black cat like Litten can turn into a big, bad, trash-talking wrassler. With his physique, he’ll play well in the pub scrap, and he’ll pretty well grapple any challengers to the floor, perhaps also making use of the ring ropes he’s somehow able to conjure up. As such, Incey’s a great choice to tag-team with, or hide behind as the case may be. But then, wrestling is all fake, innit? So who knows how well he’d really do? 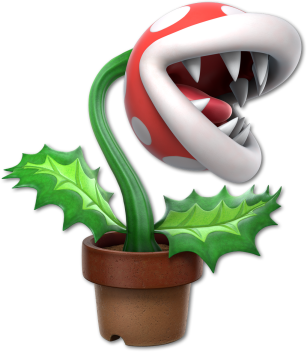 Any pub that has potted plants on their tables is a bit poncy anyway to start with, although admittedly they don’t tend to be in the Venus flytrap mould like the Piranha Plant here. Still, this is a step beyond – this is Sergeant Nicholas Angel going out on the batter with his peace lily. As beautifully kept as Angel’s pride and joy was, I hardly think it would have rushed in to give him back-up against the Greater Good. No, Piranha Plant’s gnashers may be nice and sharp, but you’d have to admit it’s far more likely that he, she, it or they would just get thrown across the pub floor, or maybe it’ll have its pot smashed over Whacker Kelly’s big bald noggin. This leaves your plant buddy a broken mess on the floor. And I know he’s got little legs to potter about with, but come on – he’ll be up in flames next.

In roughneck pubs, you tend to want to keep the head down and avoid standing out as much as possible. There are some places you walk into and the music stops, if you know what I mean. Joker here is independently minded, to say the least, so you may very well be cutting about this pub with a big cartoonish target painted on your head. Although I do enjoy the fact that he’s dispensed with all PG pleasantries and has elected to bring a gun to proceedings. Not even Solid Snake can get away with that one in the world of Smash. But you’ll scarcely believe it when, just as it looks like Joker’s gonna put one in Mental Mick Murphy’s canister and save you a bruising, he instead shoots himself in the head. This then turns him into a big anime tiger or something. Try him, but don’t be too surprised if he flakes out on you.

He wields a sword and shield, and he doesn’t say much. He’s got a bit of magic up his sleeve, bundles of strength, and he always turns out to be some hero of lore. Sounds a lot like a green elf I know, but what does Hero bring to the table? Well, truth be told, you always feel a bit vulnerable and fragile in the Dragon Quest games, as if you’re one piece of bad luck away from taking an absolute hiding. Add to that, by the end of their games the Heroes often find themselves married with kids. And both you and I know that starting a family is the absolute death of a man’s pub career. You’re either having to stay indoors every night, playing the role of a family man. Or even worse, you have to bring the whole family out, and your kids are there running around the place annoying everybody. What’s Dento Nolan gonna think of that? If you want a stoic swordsman for your ensuing brawl, just bring Link instead – now there’s a man with no commitments. Last I saw him was down the fishing pond, for God’s sake. 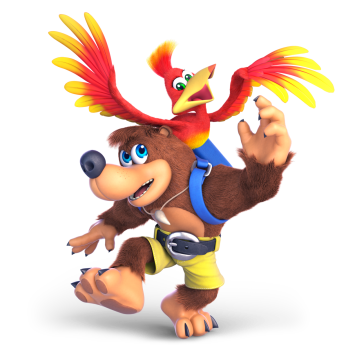 Did I say these guys were dream characters? The best thing about Smash Bros character reveals these days is that they each have their own dedicated video. It’s a lot more ostentatious than Sonic’s introduction on the old Smash Bros Brawl Dojo – the blue blur did get a little video alongside his reveal, but otherwise, there wasn’t much effort at all. But now, here we are, heavily requested characters really are making it into Smash. Now personality-wise, Banjo is a friendly, laid-back bear, while Kazooie’s a wise-cracking sassbird. But if they were more realistic portrayals, what’d happen during the first innings of a pub fight is that the bird would squawk and flap about the place, dropping feathers everywhere, before flying headlong into a window – or if it’s one of those grisly pubs that don’t have windows (always a bad sign), it’ll get shot down by a flung pint instead. As for Banjo, he’d be a big, angry, hungry burr that’d just maul and claw his way through everything around him. You’d need an axe to take the beast down, and if you’re the unlucky one swinging it then your aim better be true. But we must treat these two based on how they appear in the game, and somehow, I’m not so sure Kazooie flatulating eggs onto the tables, the floors and the patrons’ Doc Martens will go over so well. I love this duo, and it’s a genuine thrill to see them again. But let’s keep them on the straight and narrow and away from the dingy taverns.

90s jeans, a 90s baseball cap, and I don’t know what era you’d call that hair, but it all equates to some classic ass-kicking. Terry’s one of the OG fighters, or maybe I should call him one of the King of Fighters. In short, he’s well able to batter pretty much everyone who comes his way. I also get the feeling that Terry was someone in Japan’s idea of what a typical American looks like, which makes him a racist caricature up there with some of what Punch-Out turns out. As well as that, we now have Terry Bogard and Guile in the same game, and if they were to have a lovechild, it’d actually come out the womb (or Guile’s hair) singing the Stars and Stripes. Actually this meeting of the two USA giants probably happened in some SNK vs Capcom game somewhere as well, and unlike Smash Ultimate that game probably would have featured Mai Shiranui and her two bosom buddies. What was I saying again?

Really? Another anime sword fighter? I know Fire Emblem has a zillion characters in its repertoire, but would it have killed them to at least pick one of the characters with properly massive boobies? I once saw a photo of a night out with about twenty lads in frame, and it was pretty stark. Honestly, they were all identikit: the same hair combed to the side, the same smile that was never far away from a fight, the same sleeve tattoos, the same facial hair. That’s what it’s like, when all the Femblem lads walk into the pub. I’ve put the female version of Byleth here, and at least she’s a cut above the usual basic ‘dogs and ducks’ you get on Tinder. But if anyone finds out the difference between female Byleth and say, Corrin, or every other kendo anime character in existence, then let me know.

To Be Continued (again)!