Toerags, Titanics and thunderous crying – it’s a pretty diverse range of emotions below, to match the pretty diverse range of Pokémon available to you in the Hoenn region. Don’t count your chickens now, because there’s still a zillion water Pokémon to get through in the Hoenn Dex. And in later regions, we obviously have to acquaint ourselves with the fact that there are rubbish bags, ice creams and carkeys all vying for a spot on our team. Next to guys like those, your Minuns and your Volbeats don’t look so bad, do they…? Ah, don’t answer that.

Its stats won’t get you many girls, and even with its Mega-Evolution it could do with a whole lot more before becoming competitive, but Sableye does have a wonderful USP to its name: its dual typing of Ghost and Dark means it has no weaknesses. Practically, this means… not much, since he’s still just a ghosty gremlin with not much corporeal muscle at the end of the day. You could do some crafty cheating and give it Shedinja’s Wonder Guard ability, that allows only Super Effective moves to bust through. It’ll still die to your Stealth Rocks and your Sandstorms, but at least you can annoy your fellow battlers for a while. Otherwise, pluck the gems from Sable’s eye and leave him a destitute little ghosty.

This Pokémon won’t even do you the courtesy of facing you. As a result you may immediately think it’s a bottler, but really, Mawile is all about intimidation and disrespect. But I have to be honest, Mawile’s face puts me in the mind of the little toerags who ally themselves with one of the large groups of gurriers who get into the teenage habit of causing trouble and stick with this lifestyle until they reach their 60s. While the proper tough lads are out swinging at Pakistani shop-owners and stabbing innocent folk outside wretched nightclubs, Mawile would be throwing stones at cars, spitting at the elderly and generally hiding behind the bigger boys if ever things came to a head. A cunning runt, in other words. Give Mawile an ASBO, not a permanent space in your team.

Well, you can’t spell Aggron without aggro. You’ll first have to understand and accept that this thing is a bit of a Rhydon in terms of getting Titanic’d by Water attacks, but Aggron immediately makes its presence known. It is a beast, and that’s no lie. Leaving aside the fact that 10-year-old children shouldn’t be running around the big bad world unsupervised, what’s even more shocking is that, with relatively little effort, these kids can train up city-destroying monsters like Aggron. This thing could probably raze America if left unchecked. The only issue with these Steel Pokémon though – are they stainless? Because you’d be a long time getting the WD40 all over Aggron. Would he rust quickly, would you not be able to have him come out of his Pokéball into the cruel oxygenated world and follow behind you, like an obedient little weapon of mass destruction? So many questions.

Have you ever tried meditation? Sitting there entirely silent, blocking out everything and allowing waves upon waves of nothingness to wash through me, it all reminds me of work meetings where I’m expected to take the lead. But when I stop to consider all of those maybe-I-should-have-applied-myself P45s I’ve received over the years, I can only conclude that meditation is a bad idea, and will actively erode your soul rather than enhance it. In the Hoenn Throwdown stakes, Medicham beats out fat Hariyama but probably loses out to Breloom. But can you really acquaint yourself with using a Grass type on your team? Until you can trade over Machamp, stick with its two-armed Buddhist cousin Medicham.

I’ll be honest, I have Manny here down as a bit of a dork. His colour-scheme and design makes me think of some space armour that they might wear in Red Dwarf, or the cover of the first Mega Man game. And if I’m going to cut about with an electric quadruped, I’d rather it was a zapsheep or a Jolteon. As you know, I’m undefeated in Pokémon battles, but I can exclusively reveal my weakness to you – Electric-types. I never use them, I never defend against them. I just pretend they’re not there, until suddenly they are there and I get a quite literal nasty shock. But the ones doing the shocking are always the aforementioned Jolteon, or Zapdos or Luxray or even Galvantula. It’s never Manectric. 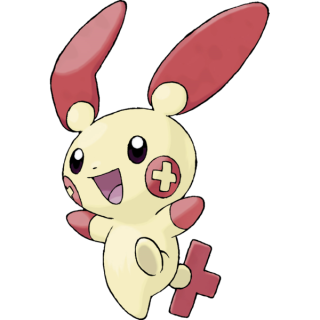 I don’t care if there are differences, I’m taking these two twonks together. These two are Generation III’s Pikachu clones, but also do a night shift as ambassadors for double battling, a feature new to Pokemon Gen 3. In truth, you’ll only have to endure a handful of double battles in the single player game of RSE, so there’s no need for you to remember all the rules. Rules like, “why has my Earthquaking Aggron blown away my Raikou as well?!?”. Plusle and Minun’s unique selling points are that their Ability helps the other one out, so long as they’re both in a double battle together. Would you suffer a Pokemon with poor stats because it gets a bit of help in double battles? Would you suffer two of them?! Why not just throw in two Pokemon with the Intimidate ability?!? Kill ’em both. 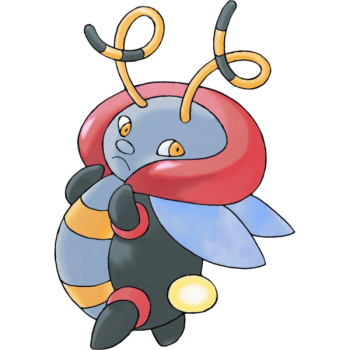 When I heard of a Pokémon called Volbeat, I immediately imagined it was some garish tribute to the Danish death metal group of the same name. Unfortunately, although Pokémon added a Steel-type in Gen 2, it’s never gone metal and nor is it likely to. Volbeat, as it turns out, wouldn’t quite cut it in a mosh pit. As a woefully weak, fat insect Pokémon, it’s already got a number of black marks, red flags and orange weather warnings against it. What it does have is a decent colour scheme, although even Ledian beats it out here. Still, at least it looks better than Illumise.

314. Illumise
You thought I was joking. You were crying out for another lightweight Bug-type with poxy stats, and here it is. Illumise is probably the kind of Pokémon that Walter from the Beano would use. If that reference means nothing to you, then you should at least know that Walter looked like Egon Spengler and he was the head of a gang of kids called “the Softies”. If all of that ain’t enough to dissuade you from Illumise – and you’d have to be some kind of a sadsack – then just look at its stumpy little limbs. What kind of a dig could this thing throw?!

It was over for Roselia when I went into the Pokédex size comparison feature and saw that she only reached up to your Trainer’s ankle, if that. What if Rhydon uses Stomp on her? What then? I often send flowers to each of the six dozen girls I’m in love with, all at once. They’re usually sent back a couple of days later, crushed underfoot and with nasty return messages attached. I end up in tears, just a real mess of thunderous wailing. And I keep getting exponentially louder each time I see more crushed poppies getting pushed through my letterbox. Well, multiply that level of anguish by about five thousand and you’ll get somewhere near your reaction after you throw Roselia into a crucial battle, and you’ve bet your life savings on the win.

The first of two extremely forgettable Pokemon of Gen III, with the second coming right up. All I can really tell you is that its pre-evolution, Gulpin, could be a barrel of laughs in Super Smash Bros Brawl. Has anyone ever been shameless enough to throw Swalot out in battle? Even the hipsters would pass this up. There are Pokémon hipsters, aren’t there…?

An honest question, because I really don’t know the answer: if you try to trade Pokémon online, you’ll find there are an awful lot of name restrictions that cover off swear words and insults that you’d have never even thought of, or not heard since the early 90s. You won’t be able to trade over Cofagrigus, put it that way. But then you get a restriction for the Bulbasaur family due to some French slur, so how can that make sense? And my question is, can you trade over Pokémon with ‘pedo’ in the title? It must be the most common nickname for Hypno, so I need to know this. Apart from that, Sharpedo and its prior evolution Carvanha are as common as dirt in Hoenn’s fifty water routes – but at least in the Hoenn remakes, surfing on Sharpedo lets you cut about twice as fast. Now that’s useful…