I’ll say this for the Generation 3 lineup of Mons, it’s certainly diverse. In this piece alone, we’ll go from Rule 34 bait to sumo wrestlers to Digimon rocks to mushroom Ryu from Street Fighterses. It’s a little bit more than 3 Magnemites stuck together or a mega pile of sludge, know what I mean? Mind you, the originality does fall down a little by the time we get to Azurill. 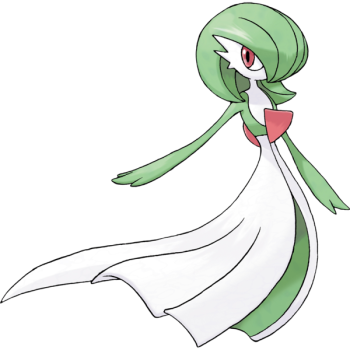 I think I preferred Gardevoir before she became a Fairy-type. I don’t understand its body at all, where it starts, where it ends, what its legs are, and all of that. I understand there are several million images that will properly convey its anatomy to me, but Google Images throws up a few red flags every time I try to investigate this, so I’ve stopped bothering. Anyway, Gardevoir is tough as old boots. Use Calm Mind as many times as possible and then lay the smackdown with Psychic, hoping it doesn’t get slapped silly or that a Dark type doesn’t come in, or this fella is double toast. I say “this fella” because mine was unusually… male. Isn’t that weird? There could scarcely be a more female looking Pokemon, unless you count Jynx. Maybe this thing should be treated as the Pokémon equivalent of the Dark Magician Girl. I’ve got no problem with that, no siree. 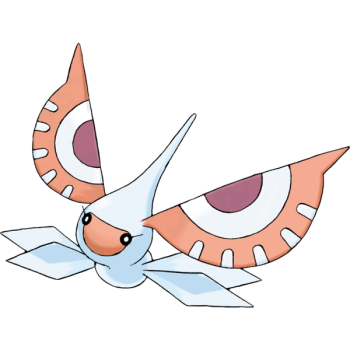 I think it would be bad enough to have a massive insect bust its way out of your Pokéball and start squittering about your room, but one with massive “eyes” like this devil? Can you imagine trying to “rein” him back in? Well, Masquerain might be a cruel trick to play on your friends. Wait for them to hop in the shower, and then send the water-loving Masquey in after them. An homage to the famous Psycho shower scene will play out as your unsuspecting pal wheels around to see a pair of ginormous, glaring wings slowly rear up over the shower curtain. As the violins begin screeching, Masquerain flies aimlessly around your mark’s head, bashing senselessly into it in that irritating, lost way that moths and nits do. In a frenzied panic, your friend will eventually puncture one of Masquerain’s wings, and then the real ugly scenes begin. That’s all well and good as far as your pal is concerned, but what about in battle? Well, not many fragile insects on our previous lists have made the cut, whereas flame-breathing goliaths always seem to. Wonder why that is? 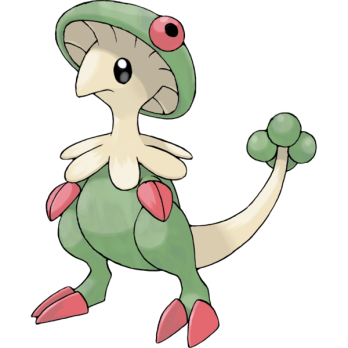 They both dabble in mushrooms and both have the ability to use Spore; so comparisons are immediately drawn between Breloom and Parasect, the forgotten Bug of Generation I (which is saying something). Already though, you can tell Breloom is a winner: far meaner stats, and a Fighting type to use Brick Break with. Compare that to a bedraggled insect with a massive parasitic mushroom feasting on any part of its host that it can get at. Creepy stuff. Even little Shroomish is a more impressive character, with its mean, little scrunched-up face. Breloom is one of those designs that just works, a design that inspires confidence. You’d love to go on a hike with Breloom, or even rock-climbing or full-on mountaineering. With his athleticism and resourcefulness, he’d carry your sorry behind all the way up that mountain and never once complain to you about it. And if any fellow hippies up there started mouthing off, Breloom could flatten them in seconds. Then the two of you can sit around the fire (keep poor Bressie a safe distance away here, in case he burns up) and drink some warm cups of sweat and toejam, before getting further up the mountain early the next morning. Lovely stuff. 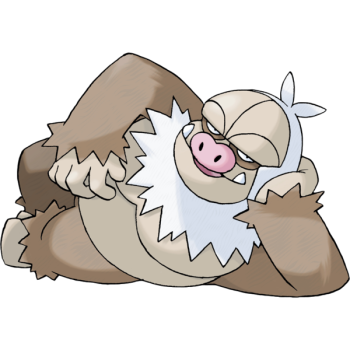 Dishes out attacks like Tyson in Round 1, but tires as badly as Foreman in the eighth. If you’re going to use Slaking, know that its “Ability”, Truant, prohibits it from moving every second turn. And it’s almost always going to move second as well anyway. So essentially, it does battle at half pace, while enemy Medichams, Throhs and Sawks jab it like the wind. Even after six Curses, Snorlax can go twice as often as the lackadaisical Slaking. Would you be bothered? It hits like a train, don’t get me wrong, but you could just Dig or Fly or switch to a Ghost-type or something and escape pretty much any punishment. Or put it to sleep or paralyse it or confuse it, they’re good ones. Use Protect to escape damage… there’s a lot of things you can do to vex this big beast. Slaking and its crew are pretty good representations of sloths really – sharp claws that look like they could do serious damage, but the thing just does sweet Fanny Adams all day. Amazing they’re not extinct, really. 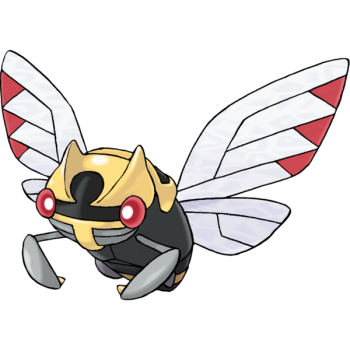 When I think ninjas, I don’t think massive insects, but what can you do. It moves quick, hits with mean stingers and it ain’t nice to look at. In those respects, then, Ninjask reminds me somewhat of the Cazadore enemies from Fallout: New Vegas, but with only a hint of the nastiness. Those things are real by the way, the Cazadores, but we call them the tarantula hawk. A bit smaller, indeed, but no less potent. If you should get stung by one of those boys, the only thing your body can do is break down and scream. Not really much of a defence, is it? But you must remember that these things prey on tarantulas. Tarantulas, for God’s sake. If I ever saw a tarantula in the wild, I’d be begging for that same tarantula hawk to swoop in, defeat the tarantula, and then sting me anyway as due punishment for my wettiness. Which would be futile because I’d have been on the deck screaming in fear due to the tarantula anyway. If Ninjask is even half as nails as this thing, which I suspect it might be, then it’s a fearsome bet for sure. 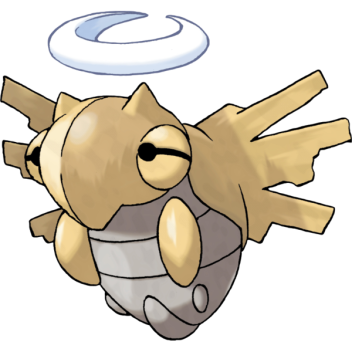 Now here’s a unique Pokemon, a Pokemon that really shows what little guts I have – lest I’d have given it a try in battle. When you evolve Nincada to Ninjask, and if you have a space in your party plus one Pokeball, then you’ll also gain a Shedinja to use. So it’s a Nincada evolution… of sorts. Since it’s only the shed skin of Nincada, I wasn’t expecting it to be particularly strong. But only 1 Hit Point, no matter what Level? One?! Well, here’s the dope: Shedinja’s ability, “Wonder Guard”, protects it from any and all damage from a move that isn’t Super Effective. This means that only 5 movetypes will affect Shedinja, although obviously that one move will put it out of commission immediately. However, Shedinja lets itself down by also being affected by weather and entry hazards, so even one round of Sandstorm beats it as well. So Shedinja isn’t as invulnerable as it may immediately appear, but if you can manage to get yourself into a situation where the enemy no longer has any moves that can affect Shedinja, then you’re laughing. Laughing maniacally, I expect. I imagine that feeling of satisfaction, when the opponent is completely powerless to beat your insect’s husk, is akin to… well, not sex, but at least going to the toilet when you really need to. The Pokedex entry claims that looking into the back of Shedinja’s body will cause that person’s soul to be destroyed. Cripes. How does your ingame trainer manage to use him? 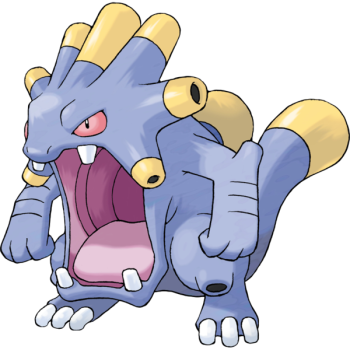 Exploud and his pre-evolutions really tried to pioneer a strange niche of moves: sound moves, which seem to have no other trait besides being ineffective against Pokémon with the Soundproof ability. What does this mean? It means that useful moves like Heal Bell won’t cure any of your Pokémon with the Soundproof ability, that’s what it means. Well, I suppose Exploud isn’t too bad, for a bog-standard Normal type. Ugly as sin, though. I mean you couldn’t have this thing follow you in HeartGold/SoulSilver, could you? The 3DS games didn’t have following Pokémon, more’s the pity, but this could also have been a blessing in disguise because Exploud didn’t look much better in the three-dimensional sphere. Would you rather the piercing wail of Whismur or the ungodly yelling of Exploud? Why not drown them both? 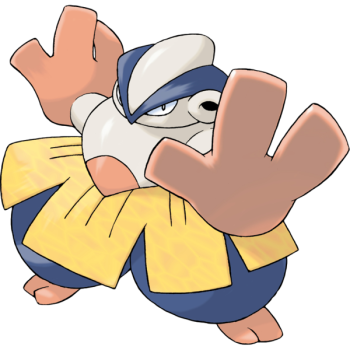 It won’t beat Machamp, but this donut-looking doofus does alright in the sparring. But is it a boxer? A karate chopper? Does he specialise in some other kind of chop socky? Well, according to an archived Geocities site, they were gonna bring Hariyama in for a role in Rocky III, but that went to Hulk Hogan instead. Hogan finished out his storied wrestling career in admirable style and went on to do the arguably greater reality television programme, Hogan Knows Best. Hariyama became a Generation III jobber and has scarcely been seen since. Sad, but Skid Row’s thirst for down-and-outers is never quenched. If you want a fighter, you’re always just going to go with Machamp, aren’t you? Maybe Medicham if you’re more of a thinker. This guy is just a bit too sumo. 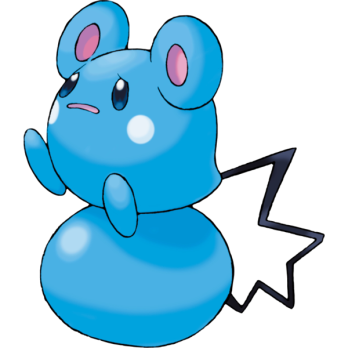 The first of only two Gen 3 Pokemon related to anything that came before, and they’re both baby Pokemon. The next one to come is a whimsical little thing, but what the bloody hell was the thinking behind this creature? I suppose, given that Marill (that is, Diet Pikachu) didn’t get anything near the the popularity that Game Freak and Nintendo had been hoping for, Azurill was intended as a sort of gambler’s last stand, a final hand that might make the whole night at the table worthwhile. A picture of Azurill was one of the first we saw of the Generation III Pokemon, but even that couldn’t save the entire evolutionary line from doom. Pikachu still takes centre stage in the anime to this day, whereas Azurill and its other sugary loser brothers are as relegated to mediocrity as young Tracey Sketchit was – I repeat the wisdom of before: don’t try and intimidate a king. 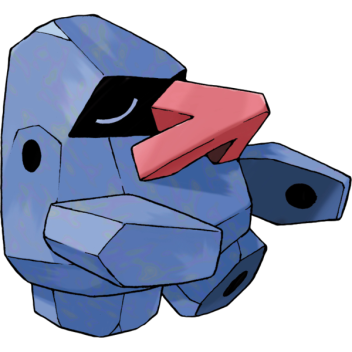 Nosepass took quite a bit of flak for its mediocre design back in the day, but I didn’t think the little rockduck was that bad. That said, we won’t mention its future evolution, possibly intended as one of many overt middle-fingers from Game Freak to the fans, for having the temerity to mock their design efforts. It’s got some kind of magnetic powers, like its stony beak always pointing north or something. You obviously wouldn’t think twice about using a solidified version of Farfetch’d in a battle, and you don’t need me to tell you that. Mind you, Gym Leader Roxanne uses one, punishing posing fools who thought they were clever choosing a Fire starter (twisted Firestarter). Just like Brock did! 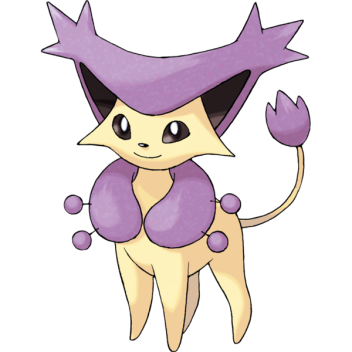 If a Normal type (or in many cases, a Water type) hasn’t got some sort of unique selling point, like a nutcase design, a couple of mental stats or some insane move, then it might as well just forget all about it. But unfortunately, Delcatty goes the same way as, I don’t know, Granbull, and consigns itself to generic mediocrity. I suppose it does get a small niche as the Pokémon of choice for the haughtier ingame trainers, the ones that give you significant capital after you beat their beloved monsters into submission. But you’ll genuinely be surprised at how easily Delcatty gets taken out, each and every time, and this a fully evolved Pokémon. Pitch these scraggy wee things into a bucket at the earliest opportunity. Disclaimer: some girls will fall in love with Delcatty on sight, so in this endeavour you’ll have to weigh up whether you’re otherwise masculine enough to pull off ownership of the cat.