You may already know this, but fairly recently an old prototype of what would go on to be Pokémon Gold/Silver/Crystal was found and shared on the internet for the world’s Pokéanoraks (that’s me and you) to enjoy. In there, you had a whole host of Pokémon designs that never saw the light of day, including pre-evolutions for Meowth, Vulpix, Doduo and more. There was a kind of metal condom Pokémon that was allegedly Ditto’s evolution. And you won’t believe what Porygon2 was slated to look like.

Some of the Pokémon below were present in that beta prototype, with some surreal changes. There was a poison Umbreon, a Girafarig that really did look like CatDog, and Wobbuffet never happened. Can you imagine a reality like that, with no Wobbuffet? That would have solved all of our problems. 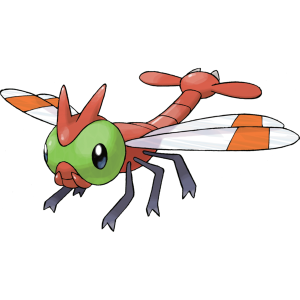 I don’t much like insects, but do they have to be made so weak in the Pokémon games? It gets a little stale talking about how pathetic the bugs are. But as a certified Pokémon critic, I’ve gotta do it. This bulbhead with wings here, Yanma, might as well not have existed until its evolution came along to save it two Generations later. If you catch this and put it in Bill’s PC, Bill actually rings you up on your Pokégear and shouts his disapproval and disgruntlement at you, Mr. Resetti style. Do you want to submit yourself to that kind of humiliation? 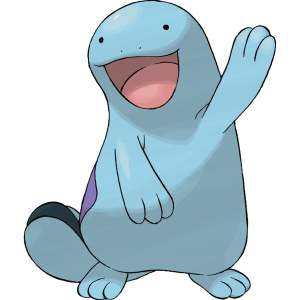 It was interesting to see what kind of new type combinations would be thrown up in GSC. The adorable Wooper’s typing of Water and Ground, giving it protection against Thunderbolt and Thunder Wave, made it worthy enough to be trained up. But then it evolved into the derpy Quagsire, the type of Pokémon that your trainer suddenly didn’t want to show off to girls. And you realised that Grass attacks left its ass for… grass… Better luck next time, squire. 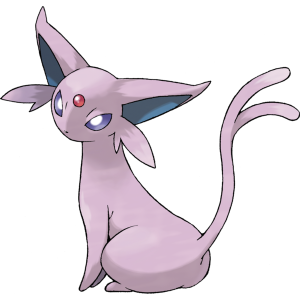 True facts, Psychic Pokémon are boss. Eevee by itself is less boss, but the first of its two new GSC evolutions, Espeon, gets a pass and a half. Just look how sleek and elegant it is – it makes Persian look a bedraggled moggy in comparison. And those frightful eyes, that seem like they could cause your mind to snap with but a single telepathic brainwave. You know when cats, even friendly cats, stare at you intensely? Imagine Espeon here doing that, but the more it glowers at you the more your mind melts. Between Espeon and Xatu, a supervillain would be hard pushed to make a choice for a sinister companion. Why not both? 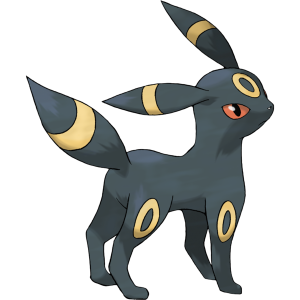 I forgot to mench (Official certified Pokémon critic speak for ‘mention’) that Generation II brought two new Pokémon types to the fold – Dark and Steel. And here we have our first Dark Pokémon, hurrah. Little fact for you here, the ‘Umbr-‘ part of Umbreon’s name comes from ‘umbra’, referring to a specific part of a shadow. Interesting, no? I suppose Darkeon might have sounded a little racist, a pressing issue in Game Boy Color games of the time. As I mentioned above, Umbreon was slated to be a Poison-type, and I believe one or two of the frightful Pokédex entries reference this. So you’ve got one of the closest Pokémon to a little black kitty as possible, but you make it poisonous. Imagine having a moggy, except anytime it gave you an accidental scratch or pretended to bit your arm, it injected you with debilitating poison instead? Make no mistake, Umbreon is a resilient, mean little feller, Poison-type or no. 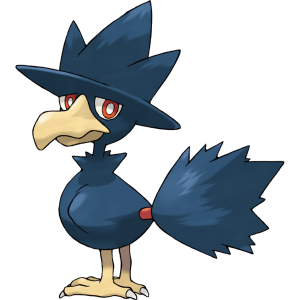 And right away, we have another Dark type. I like his look, and he does try his best, but this guy just can’t progress beyond the level of ‘little tryhard crow’. The Dark type needed a few weak links as well, I suppose. Really, its purpose as a type was to mess up the Psychics, who were gravely overpowered in Generation I. Indeed, not only are Dark-type moves super effective against Psychic types, but Psychic moves can’t even lay a boot on Dark types in return. But are you really going to send this fella in against Alakazam, Slowbro or even Mr. Mime? Come off it. I like his aesthetic but we can’t seriously consider Murko for a team. Wait until its Gen IV evolution though, hoo boy. 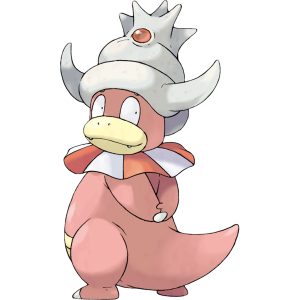 One of the first GSC Pokémon that we saw, or certainly that I remember. A Slowbro with a vintage hat instead of a malformed Shellder! And he’s smart, too! Wouldn’t it have been better if he were called Fastbro? We thought it’d be a Slowbro evolution, but no – it was a sort of get-out evolution for Slowpoke, like Politoed and Bellossom. In case Slowpoke wants to rise above his bad upbringing and make something of himself, a rose growing from concrete kind of jobby. Just stick with Slowbro, guys – don’t try to be smart. Slowking did gain mild infamy for having a banned TCG card. Something to do with depriving your haplessly stupid opponent of using their overpowered Trainer cards. Speaking of, isn’t it a terrible shame that there was no TCG computer game with the GSC Pokémon? I recently played a translated version of the sequel to the Game Boy Color’s Pokémon Trading Card Game. It was pretty lengthy and restrictive at first, but by the end it had become quite smashing. That’s the end of my Alan Partridge aside. 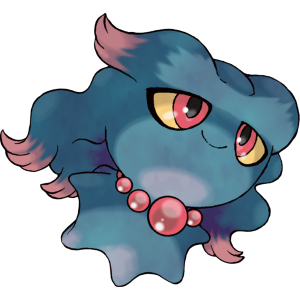 Only one new Ghost was added to Pokémon GSC, but at least it wasn’t desperately weak to Psychic or Earthquake. That’s because it’s the first ever pure Ghost-type. Yes, GSC made plenty of history too, you know. Plus it brings a repertoire of dastardly, horrifying moves like Curse, Destiny Bond, Perish Song, Pain Split… Christ, don’t they all sound grim? Yes, Misdreavus is a bit of a bad egg. I mean he’s got a mean streak. Plus, he, she or it later gets an evolution in Generation IV, much like Murkrow. Goody gumdrops. 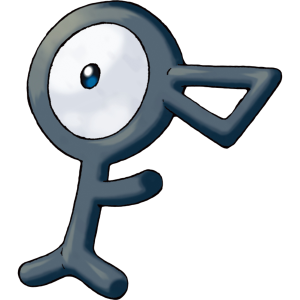 Going back to the bogey Pokémon Gold multicart I was talking about for Sudowoodo’s entry, coming across Unown for the first time was a bit of a pants-wetter. A crop circle Pokémon? That’s what Unown was called by one magazine I had at the time, as it previewed the Japanese version of the game to the best of its non-Nihongo ability. You didn’t get Japanese translations so easily back then. The mag also speculated that it could be ‘the new Missingno’. This only made things even more creepy when variants shaped like different letters of the alphabet showed up all over the Ruins of Alph. Now, through the power of English (or French or Spanish or Italian or any language that isn’t moonspeak) we know that Unowns are merely statistically weak Pokémon with only one move, Hidden Power, which is a whole mystery in of itself. Unown comes in 26 variants for each letter, and these days there’s 28, with an exclamation mark and question mark Unown added. It all sounds quaint and interesting, but where Unown’s team viability is concerned, you’ve only gotta ask yourself one question: do you really want to be throwing alphabet soup into battle?

I can’t help but get the impression that Wobbuffet is the type of Pokémon that’d turn up at your house unexpected at 2 in the morning and want to hang out with you. And he’d be damn loud about it as well. It doesn’t attack directly, instead using defensive moves to indirectly mess opponents up. Well, why not try him as an experiment in battle? It makes those wins a lot satisfying when you trick your bumbling fool opponent into essentially committing assisted suicide. Then someone effortlessly sidesteps around Wobbo’s gimmicks and you’re made to look stupid, ending up in you boxing Wobbuffet for good. Oh well, you tried. Is it true that only the black tail counts as Wobbuffet and the big smiley blue blob is just a husk front? 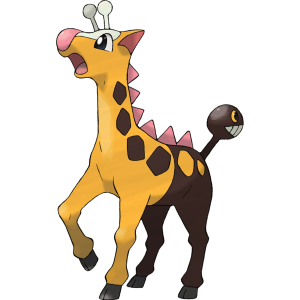 It’s a palindrome. A whatinome? Yes, that’s the spirit. It’s also got a Chain Chomp sticking out of its derrière. Gosh, things aren’t looking great for the big giraffe already, are they? Its Gregory Peck (neck) isn’t even that long either! At least giraffes are generally cool, and it has a rare typing – an odd combination of Normal and Psychic. One of the many Pokémon that you really want to catch upon first seeing it, before you quickly realise that you’ll never once need to use it. Shame really. 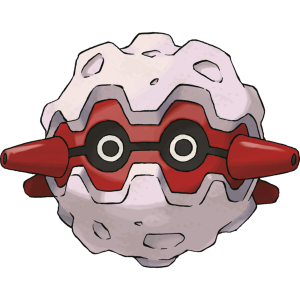 Making a team of 6 Pokémon out of hundreds of fully evolved critters means making some pretty tough decisions. But there’s one adage that you’d do well to follow: If Brock uses it, then it must be great. And as things stand, Forro here is harder than Mike Tyson’s tethicles dipped in liquid Kryptonite, with varnish applied thereafter. Spikes, Stealth Rock, beefy defenses, it’s got the lot. Forretress is what nuclear shelters should be built out of. Actually, wait… he really can’t take Fire attacks very well. That’s that then! 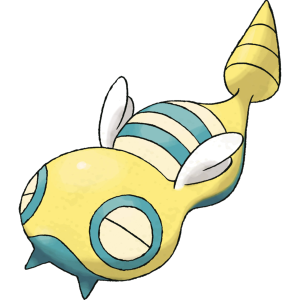 What, under the wide canopy of Jaysus, is this?!?

It must be a terrible pity to be born with claws: that’s self-debasement, foreplay and even bum-picking gone out the window. So that deprives Gligar of the much adored pokey-bum wank, and he doesn’t look awfully happy about it. But to hell with him; flying scorpions we do not need, whether in Pokémon games or in real life. I’ve seen jumping spiders before, and I know that evolution moves pretty fast. Flying arachnids are not far away. Actually, they probably already exist in some forsaken deathforest in Australia. Everything else dangerous does, after all. But when they reach Western Europe… I think I’ll have to cash in my chips. And I’m serious, you know. I’ve even seen a flying snake. 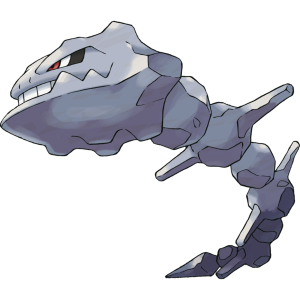 Let’s go back to the Brock School of Thought re: picking a Pokémon. Onix was a trier, that much is true, but it just couldn’t hack proper competition. It couldn’t even survive a water sprinkler for God’s sake, and you’ve got to have sprinklers – it’s Pokémon Gym regulations. So along comes Steelix, which just looks absolutely vicious, and it backs up its looks by trading the poor Rock type for the mighty Steel type and bolstering its stats. Having the Steel type tends to grant all kinds of resistances to a Pokémon, allowing Steelix to mess things up with a far smaller chance of being slapped down early doors. In later Pokémon games, you can even catch these beasts in the wild. Oh yeah!