We’re knee-deep in Smash Bros Ultimate now, and not a Waluigi in sight. Well, he’s still there as an Assist Trophy, ten years on. You can beat up the Assist Trophies in this particular game, and it’s probably a good thing too because some of them are mighty overpowered and downright annoying – just ask anyone who’s gone up against the Sheriff. As for the fighters themselves, Part 9 of our Pub hubbub here sees some of the wildest additions to the series possible, including Ridley finally making his debut. Not forgetting King K. Rool into the bargain as well. But what about the classic farmer from Harvest Moon, Pete. Where’s he? 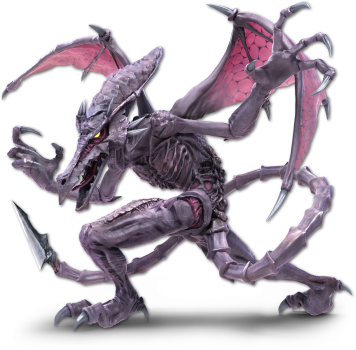 I don’t think any of us could believe it when Ridley defied the “He’s too big!” know-nothings and made his bow into the Smash Bros realm. Indeed, the last time I saw him he was about 20-foot tall, towering over Samus (whose parents he had already turned to mush) and looked exceptionally mean indeed. Ridley has had to go on a bit of a diet to get set up for Smash. But that’s only for Smash – by the time you and Ridley finally have that drink you promised each other, he may well have gotten back to his top bulk. If that’s the case, then given that there’ll be a ginormous, beastly-looking dragon in the place, this pub fight might not even break out because everyone will be too terrified and they’ll be trying to leave quietly. If someone does try to kick off… well, just look at Ridders. He can fly, breathe fire, he can grab you and drag you along the ground making you eat pint glasses and pub furniture, he’s got a viciously sharp tail and claws. Most of all, he’s got a particularly short temper. A bit more intimidating than Luigi anyway. Mind you, he’s always getting beaten by a girl. Go on about sexism, but that’s emasculating for any man or beast.

And as if Ridley wasn’t incredible enough, Sakurai sealed the deal and answered many zillions of requests by implementing King K. Rool into the game. I don’t think we’ve even seen this guy since Donkey Kong 64, but he’s hardly wasted a moment after getting the shout for Smash – blunderbusses, boxing gloves, a big huge golden belly in your face, Krool’s got the lot. He is a King after all, and he commands not only a whole load of respect but also plenty of minions. If you don’t believe that, he’ll hurl his crown at you from miles away and shut you right up. Plus, nobody’s going to go near him anyway – have you seen that maniacal, bloodshot eye of his? You just better hope that King K. Rool likes you, because if he does, he’ll look after you with hardly any trouble. But if you’re an unlikeable sort, I could see him double-crossing you almost before you’ve had a chance to open your mouth. He’ll belly-smash you right into the middle of the pub fray and laugh at you, tongue lolling all about the place. He might even set the Klap Traps on you.

69. DARK SAMUS
Not one, but two Metroid reps join the party for Smash Bros Ultimate. That’s no mean feat either, because the whole point of the game is that it’s one gal versus a desolate planet, and Ridley pops up every so often. There really aren’t that many geezers floating about on these terrible planets and ecospheres. Dark Samus here is the dark shadow of Samus (naturally), Metroid Prime itself stuffed into a replica Power Suit and powered by the highly radioactive, potent chemical known as Phazon. To be honest, Metroid Prime, whether it’s decided to be a Samus clone or a massive spider creature or an amorphus evil spirit that day, has enough power to destroy part of the planet, never mind the pub. It won’t be on your side, it won’t show any mercy, and it probably won’t buy you a round back. So while you may not get chinned by Johnner Mulligan’s granite fist, you will probably end up as ashes in a burning crater where the pub used to be. Honestly, seeing ‘Dark Samus’ just puts me in the mind of a potential Dark Zero Suit Samus, with a similar aesthetic to the Dark Queen from Battletoads, and I can’t really concentrate after that. Perhaps, in similar fashion to the questionable Bowsette craze, we could one day have a Samustroid mixture between dark entity and blonde bombshell?

70. CHROM
I’m sure the man has a whole lot of story behind him, daughters and wives and suchlike. But to me, and therefore to Bam-Bam Kelly and Mad Dento Nolan, he’s just another pretty boy. Oftentimes when I go out and get a beautifully poured pint of Guinness, the missus likes to purposely mess up the smooth creamy top by drawing smiley faces in it or something. It points to her violent and anti-social personality, you know, wanting to destroy untarnished beauty wherever possible. It is this mentality that will see Chrom picking shards of glass out of his face for weeks to come, and no amount of tricky swordplay or smart-alec Counters is going to save him here. The only Counter that matters is the one at the bar, lad. 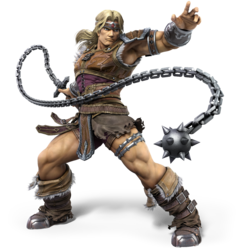 71. SIMON BELMONT
A hero from the old-school, over the centuries the Belmont clan have seemingly had only one purpose in life, and that’s to defeat Dracula when he rises once every 100 years. Would that make for a passable excuse down at the job centre? “I can’t take this exciting career opportunity to sweep hair off the barbershop floor, Mr. Terrywogan, because Dracula is due any minute now and I’ve lost my Holy Water”. Whatever about that, Simey’s a tough swine. He’ll whack you for fun with a chain whip, and even if you’ve got past this kinky torture, he can follow up with axes, bottles of Holy Water (it burns!) and even thrown crosses. Get a whack in at him though, and he’ll jump in recoil backwards through the air, gravely hurt and on the cusp of death. That is, until he can find a chicken drumstick or a porkchop in the drywall of the pub somewhere. He might be able to look after you, if you’re both careful. But if you’re not careful then be warned: he’s more fragile than he looks.

72. RICHTER BELMONT
I am a little less impressed with Richter. I can only go on what I see, you see, and Richter’s performance in Castlevania: Symphony of the Night didn’t inspire confidence. Oh sure, with a few wild button combinations he can do inhuman Shoryukens and mid-air dashes and all sorts. And his Hydro Storm move is undoubtedly overpowered. But when he bumbles into Dracula’s quarters and gives it the old “Die monster! You don’t belong in this world!” then people are going to stare. He was the good-looking star of Castlevania: Rondo of Blood. Played that one? No? How about Dracula X/Vampire’s Kiss? Neither of those? Well, hard luck Richter. I’m sorry, but it should have been Alucard as a playable fighter instead. At least that guy battered Richter, creased Shaft (yes, Shaft) and annihilated Dracula. He even got the girl in Maria Renard, questionably aged though she was, whereas Richter was left standing there like a defeated fool. Is that what you want to be in that pub? A defeated fool? 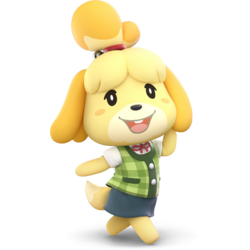 73. ISABELLE
There is one very simple reason why Isabelle would be a terrible companion to have with you in the pub once the fight starts. In brief, she is too sweet and adorable for any man to punch, so 100% of the punches are going to be focused on you. Probably mostly on your jaw and a few to the ribs. On top of that, of course, she’d be chastising you (or worse, trying her hardest to avoid looking downcast and disappointed with you) for belting down six pints in 90 minutes; for your deplorable language; for you loudly demanding that she get you a packet of pork scratchings; and for your awful table manners when you open them up and eat them. She might have a bit of use as a secret weapon, because she can do a hell of a lot of damage if left unchecked can wee Isabelle. Maybe she could even fish you right out of there with her wild Fishing Rod. But far more likely, you’re going to wish you had Snake or somebody with a bit of muscle beside you. Just thank your lucky stars it’s not Mr. Resetti.

74. KEN
Are you a Ryu or a Ken man? Sure you can say they’re broadly similar, but there’s a hierarchy in place here – namely, Ken is Player 2. That’s what he was classed as right back on the dreadful, nigh-forgotten Street Fighter 1, and that kind of thing sticks with you. Ken is therefore a Luigi, maybe even a Kiddy Kong. But it’s only his reputation that’s left in tatters – his fighting ability is beyond reproach. He throws the same punches and fireballs as Ryu does, broadly, except his are more… fiery. And he’s got better hair, too, and wears a great shade of red. Listen, I didn’t say the differences were all that big. The best part about Ken is his throw, the flippy one that resembles some sort of two-man breakdance move. There may even be a steel drum in the pub that Ken can throw a fool through. And even if you do take a bit of a drubbing, never fear, because revenge can be easily enacted. All you have to do is figure out which car(s) your assailant(s) drive, and Ken can come find it in the dead of night and destroy it with the balls of his feet alone. Now that’s muscle!