The sixth part of our not-at-all hackneyed Super Smash Bros Pub Fight (or “Bar Rammy” or “Saloon Throwdown”) steers us away from the trip-happy, Meta Knight-laden Super Smash Bros. Brawl and tears us kicking and screaming into the world of Super Smash Bros 4… or should I say, for. As in, for Wii U and 3DS, you know? And even Villager and Mega Man couldn’t stop the Wii U from being a catastrophic failure, on par with the Minidisc format.  But not to worry! You can read about their pub exploits in fine detail below:

It might seem all well and good having a potential Robocop alongside you, or a Terminator even. But those 80s robots are actually from dystopian futures. THIS 80s robot is clunky, barely functional and looks ready to short-circuit at a moment’s notice. It’s not just broken glass and claret and punches that fly during a pub scrap you know, there’ll be plenty of beer flying about as well. Bad news for R.O.B.’s circuitry, then. He didn’t really do much in his physical form back in the 80s, but his Smash guise can fire lasers and throw nasty little bits of plastic… no, I can’t say I’m convinced. Maybe R.O.B. could hover you out of there, if he can hold on to a battery charge long enough, but I can very easily see him being swatted out of the sky like a pesky grey fly, leaving you both crumpled in a heap. And then you’ll probably get electrocuted. And then piled on by 20-stone rugby prop forwards. Super! 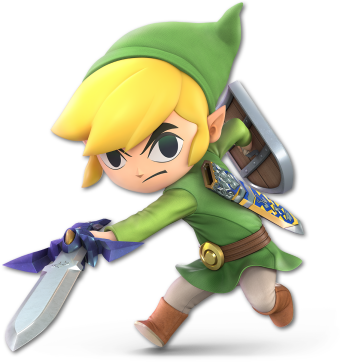 I sometimes have difficulty seeing Toon Link as a valiant young hero. I prefer to regard him as a kind of half-cat half-humanoid creature that skulks about all wide-eyed and hungry. Put another way, if Toon Link is a docile little kitten, then Ocarina of Time-era Young Link is a big, bad, feral wolf. And I know who I’d rather have backing me in a pub scrap. I must say though, I am attracted to the idea of Toon Link influencing the wind with his Wind Waker baton. I like to entertain an image of him conducting a certain song at the barman that immediately makes him pour a round of drinks for our table – a song known as the Galliard of Gargle, according to ancient scripture. This may very well make Toon Link the most popular young man in the pub. But given his appearance, and somewhat whingy nature, I have to be honest, I can see him being bullied. Maybe he can spam bombs at his opponents and you can sneak out under cover of cel-shaded bomb smoke?

Wolf is a tough lad, but being frank, I don’t see many differences between Wolf and the lads you’ll be going up against in the pub. You take Nutnut Galligan for example (60+ bar brawls and never been knocked down). Both Nutnut and Wolf are excessively hairy, heavily scarred, they both growl to intimidate people, they both bare their chiselled, sharp teeth at opponents and aren’t above biting them. Both of them also lead a team of brigands, but while Wolf leads only a few other deranged animals that fly space planes, Nutnut has the fear factor and presence to intimidate dozens of fighting madmen onto his side at any given time. It is said that Wolf was so frightened of Nutnut that he failed to turn up to the Smash 4 auditions, fearing that the renowned pugilist would be there (false alarm, it was Pacman). What a shame! What I’m trying to say is that Wolf does have power and moves and aggression, but if you’re going out on the batter with a wisecracking, spacefaring animal, just pick Fox or Falco. At least they won’t be constantly taunting you. Well, maybe Falco would…

The Animal Crossing Villager comes in eight different guises, all of them childish. Again, we’re back to bringing underagers into the pub. Try to smuggle them into the wrong place and you’re as likely to be decked by the doormen as you are from any fracas inside the premises. Not only that, but Villagers have a terrible habit of putting entire units of furniture in their pocket. It’s usually OK to nick a glass from the pub, but they do frown upon you taking their upholstery and fittings. As for Villager’s other moves… it is difficult to see what good growing a tree, watering it and chopping it down again will do in the midst of a fight, but maybe you could use that axe, along with Villager’s balloons, to get the hell out of dodge quickly. And if you’re lucky, he might snag a thrown half-pint and put it in his pocket for you to consume later. Or you could wean the young lad/lady onto alcohol and watch them wreck the place with exploding Gyroids, whatever suits. 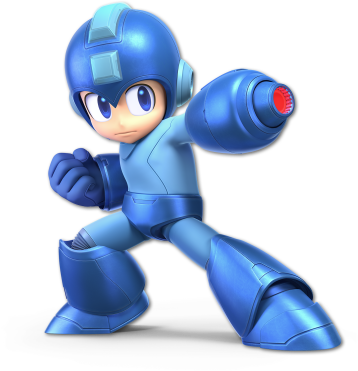 A pale, badly dressed boy that doesn’t look too confident or masculine and doesn’t look a barrel of laughs either. And joining you is Mega Man, a robot who’s had more games than LeBron. Mega Man is probably going to be a bit of an annoying companion, especially if his voice acting is none too kosher – I’m picturing Mega Man 8 here. But the Blue Bomber comes equipped with Bubble Lead and all sorts of other powerful weapons, including shields and ruddy napalm, all of which should help the two of you jump and slide out of there. You just have to hope that he doesn’t fall over into a load of broken glass shards, because the Mans don’t likes spikes. Finally, be wary that Mega Man may display some alcoholic tendencies – because for him, one is never enough. It becomes six or eight in the blink of an eye, and it’ll cost you a fortune to keep up.

Whether male or female, I think just about everybody could agree that this featureless grey mannequin never belonged in Smash. And they don’t belong in a pub either. Imagine you’re about to launch into your sixth pint and this narky T-1000 is going on at you about chasing a healthy lifestyle and what yoga poses to be doing. Or you’re smashing a carvery dinner down your gullet, half-choking on the gravy-sodden chicken, and this thing’s imploring you to take deep breaths. Simply poor pub etiquette. That’s the thing about gym rats though, isn’t it? It’s all well and good to eat celery and drink mildew, and quote wretchedly twee health blogs at naysayers. But when the punches fly, and the situation calls for a strong, fit person to take charge, where are they? 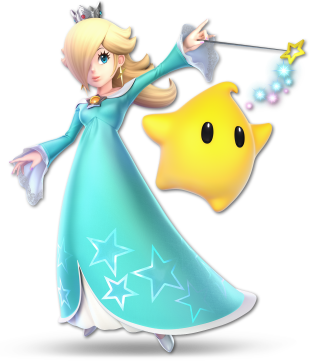 A curious case, Rosalina. I’m not entirely sure if she is some omnipotent controller of the universe and all of its Galaxies (well, all two of them) or whether she’s just some spaced-out little girl that got lost in the cosmos at some point in time and just accepted it as her lot in life. And I’m not sure where tennis or go-karting particularly fits into either of her possible life stories. Whatever about all that, assuming you can keep the burly creeps away (a bad assumption as it happens), Rosalina is yet another of our female fighters well capable of looking after herself. She won’t even need to get her hands dirty – she has a sap to do it for her. No, for once I don’t mean you, but the diligent little star-child Luma that follows her everywhere. It’s a bit sad every time Luma bites the dust, but you know what happens when stars explode, don’t you? I mean, your face will be melted off, but at least everyone else present will be incinerated as well, which crucially means that it won’t go down as a Loss on your fighting record. 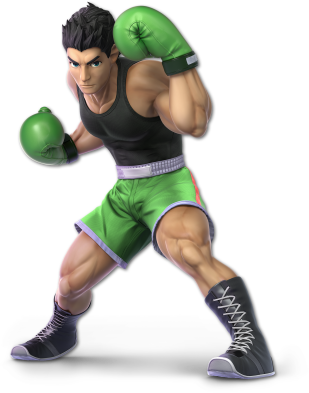 A proper contender, Little Mac was once the World Video Boxing Champion, earning the belt and going on to defend it thirteen times against outrageous cheaters. He even took on Donkey Kong – and won – before retiring with only 3 defeats to his name. By any metric, Not-Rocky here is a legend of the sport. But that sometimes confers unwanted status: if you’ve ever encountered a famous boxer while out and about, you’ll know that any prizefighter worth their salt has an “entourage” of minders to look after them. Why? Because fat old nutters reckon they can take him and end up having a pop. Mac can dispatch them easily, and is a top choice for your escape – so long as your opponents don’t use weapons or kicks or anything ungentlemanly like that. He is sometimes derided for his lack of aerial ability as well, but that’s no worries in a pub fight. After all, have you ever seen somebody down a shot of tequila while somersaulting through the air? Actually, I have once…